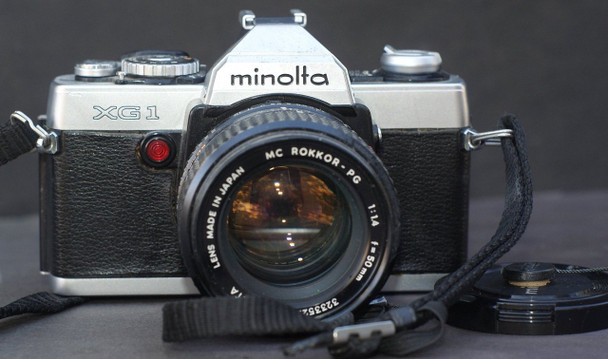 SKU:
100036
Condition:
Refurbished
Availability:
Currently In Stock! Due to the nature of our inventory this item will only be in stock for a short period of time. Quantity available for bulk purchases
Warranty Information
90 Day Exchange Warranty! Buy with confidence. We offer helpful customer service and support for all our products from sale to installation.
What's Included:
Camera, 50mm Lens

Minolta XG-1 35mm Camera with 50mm lens- Used Item IN STOCK and in good condition. All items have been previously used, but have been fully
tested and include a 90 day exchange warranty. Items ship with all needed manuals, software and accessories.
Since this is a used Item, it may show some minor signs of use but should not affect performance.

Product Description - The XG 1 was the second to appear in the XG series in 1979. It was basically a XG-E with a less informative finder display and a non-detachable back door. It was available in two versions in chrome finishing only and was an export model, not sold in Japan. Besides the fixed back door, the XG 1 had a simplified viewfinder read out: The range between 1/15s and 1/2s was now represented by one LED. Further it lacked the memo holder and had just a DIN/ASA conversion scale instead. The Minolta XG-1 camera body comes with a Minolta 50mm 1.7 (or A LATER MINOLTA 55mm 1.7).